George Westinghouse is not given his due today and has not received it for decades, being overshadowed by his rival. Thomas Edison, an inveterate self-promoter who outlived Westinghouse by seventeen years. Tonight’s presentation in the East Liberty Valley Historical Society’s Marilyn Evert Lecture Series was a double-billed effort to begin to restore some of the inventor-businessman’s luster.

Christine Davis spoke about the archaeological discoveries she made at the site of Westinghouse’s East End home, “Solitude.” One of the most fantastic subterranean finds was a 200-foot tunnel that once connected the basement of Westinghouse’s home to a private experimental laboratory secreted beneath his stable! 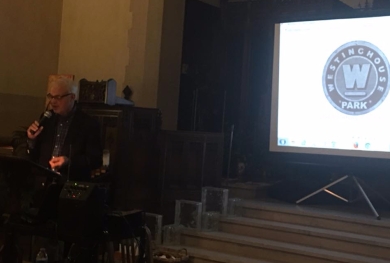 David Bear followed by talking about the park itself and how he would like to see it come alive through preservation, interpretation and activities. Living nearby, the impetus for his drive to call attention to Westinghouse and his property was the recent centennial of the park. He organized the Westinghouse Park 2nd Century Coalition to bring his ideas to reality.
I’m sure this will happen. How can I be sure? Well, of course, we all know: “You can be sure if it’s Westinghouse!”